Start a Wiki
Phasing is the ability to pass one's body through physical matter without interacting with said matter. This can be achieved in a few methods, including slipping into another dimension to move through matter, make the particles of one's body and clothing to pass between the particles of the physical matter, having a non-physical being, vibrating one's molecules at a particular quantum frequency, etc.

When in a phased or intangible state, the user is unable to be affected by any physical matter and can ignore more attacks and gravity. 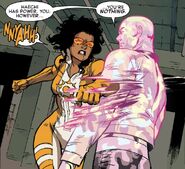 Add a photo to this gallery
Retrieved from "https://madeup-marvel.fandom.com/wiki/Phasing?oldid=298"
Community content is available under CC-BY-SA unless otherwise noted.